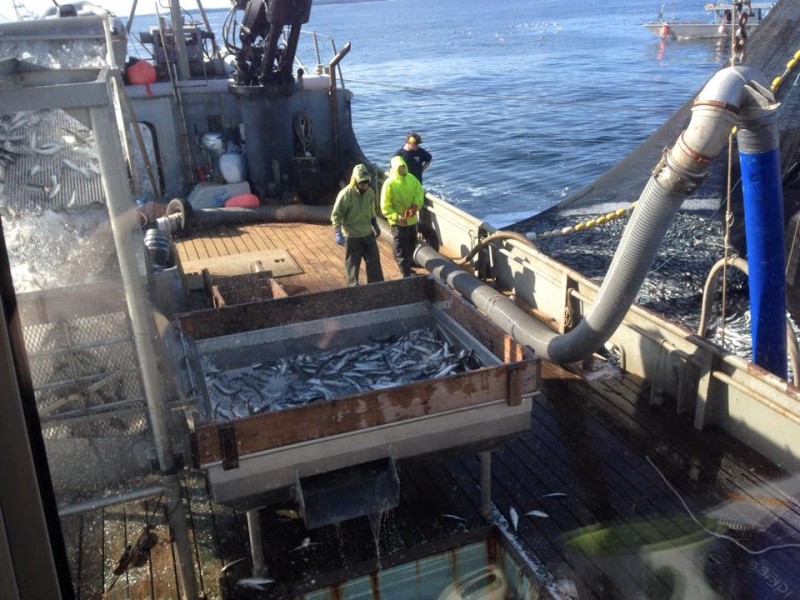 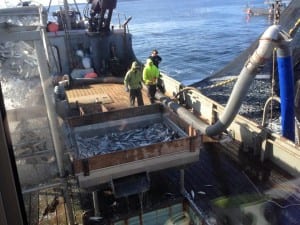 The Deco Bay loads up on herring during the second opening of the 2015 Sitka Sound sac roe herring fishery. (Photo courtesy of Angela Marie Christensen)

For the third time in a half dozen years, Sitka Sound Sac Roe Herring Fishery has closed far short of the target harvest level.

He says rapid spawning and smaller-than-usual fish combined to bring the fishery up short this season.

“You know the market likes larger fish, the bigger the better as far as sac roe herring goes. And with this smaller mix of fish, we knew we might find it difficult to prosecute the entire fishery.”

Seiners target herring just prior to spawning, when the eggs — or roe — are still in skeins inside the females. The sac roe is marketed as a delicacy in Asia.

Gordon says the department knew that this year would probably be dominated by large numbers of smaller fish. Last year, biologists found a high percentage of three-year-olds in the Sitka Sound herring stock — the first year that they reach sexual maturity. Gordon says that’s good news for the future, but for this season it meant that there were a lot of four-year-olds around.

“We did get one opening in — the second opening — where we did manage to find some larger average weight sizes to harvest. And the quality of the fish during that opening was very good. But from there it was downhill.”

Gordon does not second-guess himself much, but he does wonder if he waited a day too long between the second and third openings. There are 48 seine boats in the fishery, about half as many tenders, and maybe a dozen aircraft. Still, with all these resources, there is a limit to how many herring can be taken in a day — around 4,500 tons, or about one-third of this year’s total catch limit.

It’s a tricky fishery to pull off.

“One of the most difficult things about managing the sac roe fishery is that you have this very narrow window of time to harvest good quality herring when they’re ripe, mature, to when they spawn. But on top of that you’ve got limited capacity to handle the fish. You can’t just go and harvest as much fish as you can — you know, harvest the quota at one time. You’ve got to take it in pieces because there’s only so much tendering capacity and processing capacity.”

Sac roe seiners harvested 10,050 tons in three openings, but fell 4,690 tons short of their harvest goal this season. They experienced similar early closures in 2012 and 2013.
With the closure of sac roe herring in Sitka, ADF&G now turns its attention to other herring fisheries, like the roe-on-kelp pound fisheries in Hoonah Sound and Tenakee Inlet — both of which have had poor or closed seasons recently.

On the upside, the herring spawn — which contributed to the early end of commercial fishing — has been strong in Sitka Sound, with 42 nautical miles of shoreline mapped as of Saturday.