In a month of pride, life after Orlando 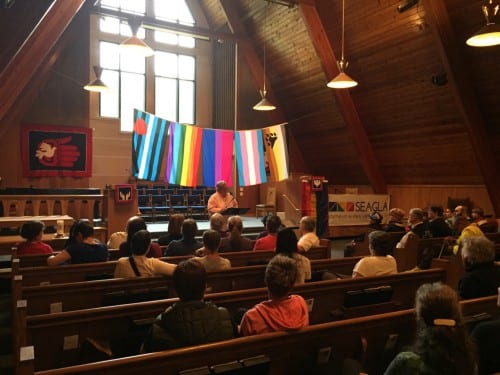 In gay communities all over the country, there is a before and an after. A before June 12th, and an after. The shooting at Pulse, a gay nightclub in Orlando, killed 49 people and was the largest act of violence against the LGBTQ community in US History. And it happened as Pride events were taking place all over the country, including a reception at Juneau’s Northern Light Church mere hours before. KCAW’s Emily Kwong was there, the day before news of the shooting broke.

The reception on June 11th was organized by artist Ricky Tagaban. He wanted to create a space for others who are two-spirited, embodying both a male and a female person. Like writer Vivian Mork. She was amazed that over 100 people came.

“We gathered at the Northern Lights Church to celebrate two-spirited people – gay native people,” Mork said. “It was the first time I’ve ever known of that happening in Juneau.”

Tagaban set out pilot bread and salmon spread, coffee and tea and an open mic. Rick Peterson, President of Tlingit and Haida Central Council, talked about how  the council authorized same-sex marriage in February of 2015 — months before the Supreme Court ruling. The media went crazy. He did 20 interviews in one day and a reporter kept asking, “Why are you doing this?”

Love, it seemed, was the answer in the room that day. Other speakers reflected – some cautiously, some joyfully – on how far America has come. Gay people can get married now. Come out in school. Tribal Court Judge Debra O’Gara, who grew up in the era of the Stonewall Riots, marveled at how the next generation has less to be afraid of.

“I came out forty years ago and it was the native community in Seattle who shunned me,” O’Gara said. “And to stand here and see my community is great.”

It’s not perfect, she said, but every year it gets better. A lot of people came away from the reception with the same feeling. And then, the next morning, it was June 12th.

(News coverage of people running. “Everybody was running.” “I got a text message from my daughter and my two nieces.” “Chaos during what witnesses describe as a slaughter.” One person on the scene said, “It was just bang!”)

“My heart sank when I saw the headlines the next morning,” Mork said. “I so wanted it to be horrible Facebook hoax. I didn’t want it to be true. But it was.”

Mork was up early to catch a plane to Louisiana. James Hoagland, who was at the reception and organized Juneau’s Pride Week, is a well-known drag queen in Juneau. Two of his friends were performing at Pulse that night. Over the phone, he learned how one got out quickly and the other hid in a dressing room for hours, only escaping after a SWAT team removed an air conditioning unit – creating an escape portal for hostages in the wall.

Hoagland identified, strongly, with the victims. “Young people who were just out to dance and be in community and have a good time,” Hoagland said. “And that so easily could have been us.” 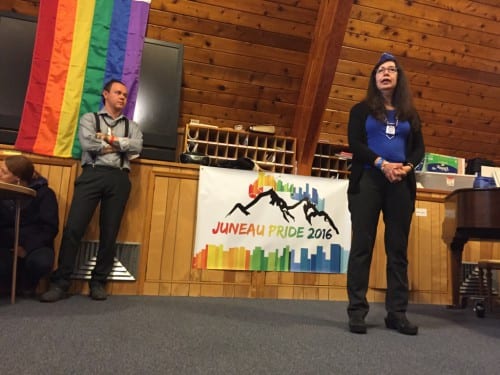 The reception was hosted at the Northern Lights Church in Juneau and sponsored by SEAGLA, the Southeast Alaska Gay and Lesbian Alliance, which celebrated its 30th anniversary this year. (Emily Kwong/KCAW photo)

If the Two Spirit Pride reception affirmed safety and acceptance, Orlando violently asserted an opposite claim: that being gay in America is still dangerous.

“I’ve had nightmares all week about being shot on stage while performing,” Hoagland said. “Somehow, I had to put that aside enough to go forward with the biggest show that we’ve ever had in Juneau on Friday night.”

That drag show, called Glitz, packed Centennial Hall with 500 people. While the shooting was in Hoagland’s words, the “elephant in the room,” it didn’t stop people from coming out for Juneau’s Pride Week. Quite the opposite. “I think people felt even more comfortable and confident being loud and proud because we know we have an obligation too,” Hoagland said.

But after pride week is over, what do you do? What kind of courage do you need to get up in the morning and continue to be yourself? Hoagland’s husband recently said to him, “I may be killed for being gay in my lifetime. And I’ve found peace with that.”

“The victims in Orlando didn’t die for no reason,” Hoagland said. “I hate that they lost their lives, but the fact that they did has changed the world.”

As for Mork, she spent her plane ride writing and recorded this message from her hotel room in Louisiana.

Mork: This is pride month and odds are there is a gay person near you who is hurting over this. Tell them you support them. Tell them you love them. Gunalchéesh.

Soon after the shooting, the Juneau Assembly took hearings on an anti-discrimination ordinance, for gender and sexual identity. And in a city with no gay bars, the Southeast Alaska LGBTQ Alliance, or SEAGLA, plans to make the rounds at Juneau business with rainbow stickers for the windows. So, that way, those in Juneau can be assured that if they enter that bar or restaurant, they will be treated with respect inside, no matter who they love.