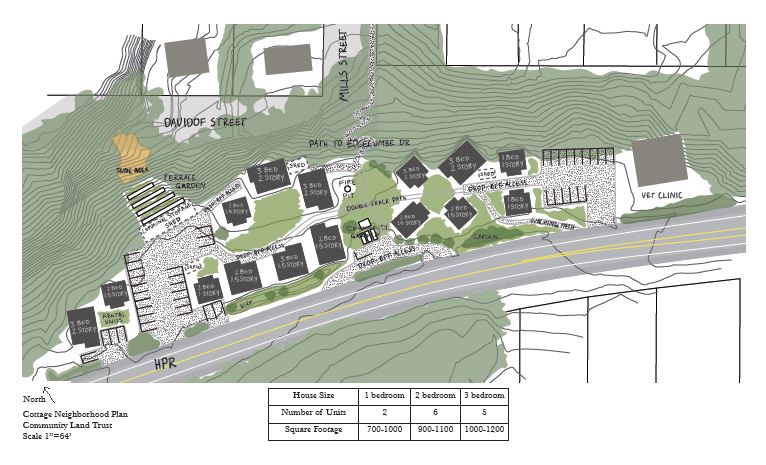 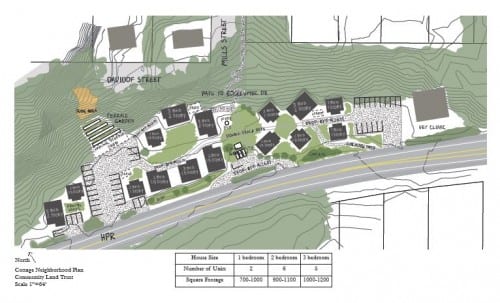 The Rasmuson funding will cover site preparation for the first six cottages on the right. Construction funding will be secured by the SCLT through a variety of traditional channels. The homes should be under construction by spring. (SCLT image)

An affordable cottage neighborhood on Halibut Point Road in Sitka took another step toward reality, with the help of almost a quarter-of-a-million dollars in grant funding.

Randy Hughey is president of the board of the Sitka Community Land Trust. He’s clearly pleased to have received a boost from Rasmuson, but he’s not surprised. He thinks land trusts make sense in a big state where land is tight.

“The Rasmuson Foundation believes it to be a model that will serve the state of Alaska, particularly because so much of the state is owned by government entities. The federal government, state government, and city government own a tremendous amount of land. They can put that land in a land trust and devote it to affordable housing perpetually.”

The Old City Shops have been out service for over twenty years, when they were replaced by new facilities on Jarvis Street. And Mother Nature sealed the deal in 2005 when overburden deposited by the construction of Edgecumbe Drive three decades earlier, came down in a mudslide destroying the state maintenance building.

Hughey said a lot of this funding will go toward preventing a repeat of that partially man-made disaster.

“We’re going to clear that out and scrape that back, and build a rock retaining wall of some size to stabilize the hillside. Then we’ll install the sewer, water, and electricity to the six homesites on the first half of that property.”

The Sitka CLT presented its plan to the assembly last fall, when it asked to purchase the site for $1. Mayor Mim McConnell is the CLT’s executive director, but even without her participation the assembly liked the idea.

Ultimately there will be as many as 13 homes on the property, if these first 6 prove successful. Buyers who invest in a Sitka land trust cottage are also investing in a slightly different lifestyle than they may be used to.

“It’s also called a cottage neighborhood, not just because the homes are small, but because they’re arranged inwardly, toward each other, with porches facing a common green, and parking is held to the outside of the neighborhood. So suddenly people are living together in a little neighborhood in a way that most architecture on most streets in America do not do.”

And the other difference from most streets in America is that in a land trust, you own only the building you live in — not the land under it. That’sthe single biggest reason these cottages will be priced either side of $200,000.

The other difference with a land trust? You won’t be able to leverage your low purchase price into big gains later. Excess profit is against the rules.

“I think people’s great concern — and I think it should be — is that the Community Land Trust, in order to preserve affordability over time, limits profit-taking at resale to 25-percent of the change in assessed value. So you get to keep whatever you put down, and whatever you bought by paying payments, and then you get 25-percent of the change in the appraised value.”

Hughey describes buying a land trust property as “climbing on to the first rung of a ladder.” Eventually, you’ll move up, and leave that first rung available for the next person. It’s an altruistic idea, in a society that places a lot of value on generating wealth through real estate. But he thinks the cottage homes will be the perfect fit for someone. 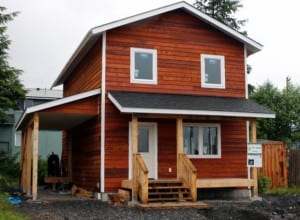 This brand-new land trust home on Lillian Dr. in Sitka is still waiting for a buyer. Although site prep costs pushed the price above the target, SCLT president Randy Hughey thinks it’s the right fit for someone at $250,000. (KCAW photo, Robert Woolsey)

What hasn’t been a great fit, however, is the Sitka CLT’s first project — a three-bedroom house on Lillian Drive.

“We, as a group, made too big of a home. We needed to be tighter with some things, and we weren’t.”

The home attracted a buyer eventually, who later backed out during construction. The Lillian Drive house is no cottage. And priced at $250,000, it might push the envelope of affordability. Nevertheless, Hughey thinks the right buyer will understand the logic of the investment.

“So the price, even though it’s above where we intended it to be, is still right in range with what people are spending to rent a 3-bedroom house in Sitka. The terms of purchasing are so favorable right now: Very low interest, very low down. People who are thinking of making the plunge should really have a hard look at the Lillian Drive house.”

In the meantime, Hughey hopes to be building cottages by next spring.