KathyHope Erickson is one of three candidates running for Tribal Council Chairman, along with Michael Baines and Lawrence “Woody” Widmark. Erickson first began working at Sitka Tribe of Alaska in the 90s’ as an administrative services director and returned to that position in 2012. She is currently the Director of STA’s Language and Education department and is retiring this year. All Tribal Council Candidates have been offered this opportunity to prepare a statement. 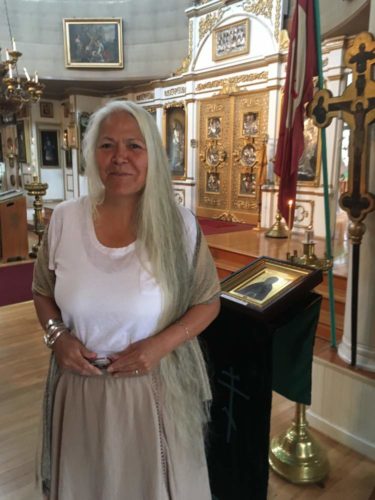 KathyHope Erickson is one of three candidates running for Tribal Council Chairman. Erickson first began working at Sitka Tribe of Alaska in the 90s’ as an administrative services director. She is currently the Director of STA’s Language and Education department and is retiring this year. (Photo courtesy of KathyHope Erickson)

I am also known as Koowayeik. I’m daughter of Christine Littlefield. We are S’iknax.ádi, of the Red Clay House in Wrangell.

I am child of Kiks.ádi, as my father is the late John Hope of the Point House in Sitka. His mother was Tillie Howard Hope.

I am grandchild of the Sitka Kaagwaantaan, my grandfather being Andrew Hope of the Eagle Nest House.

My family has long been in service to our people and I am hoping to carry on that tradition.

I know the workings of governmental bodies, having provided direct support for policy makers of the City Assembly, Tribal Council, and an Alaska House of Representatives standing committee.

I believe that those who work for a government or are elected to office are servants of the people.

I hope to put my experience in municipal, state, and tribal government to work serving as Chairman of Sitka Tribe of Alaska.

I believe that keeping government as transparent as possible is paramount.

I also believe in being as inclusive as possible – inviting all of our citizens, including our elders and our young people, to have a voice in our government workings as members of STA committees.

I would appreciate your support in the November 8 election, please vote for KathyHope Erickson for STA Tribal Council chair.