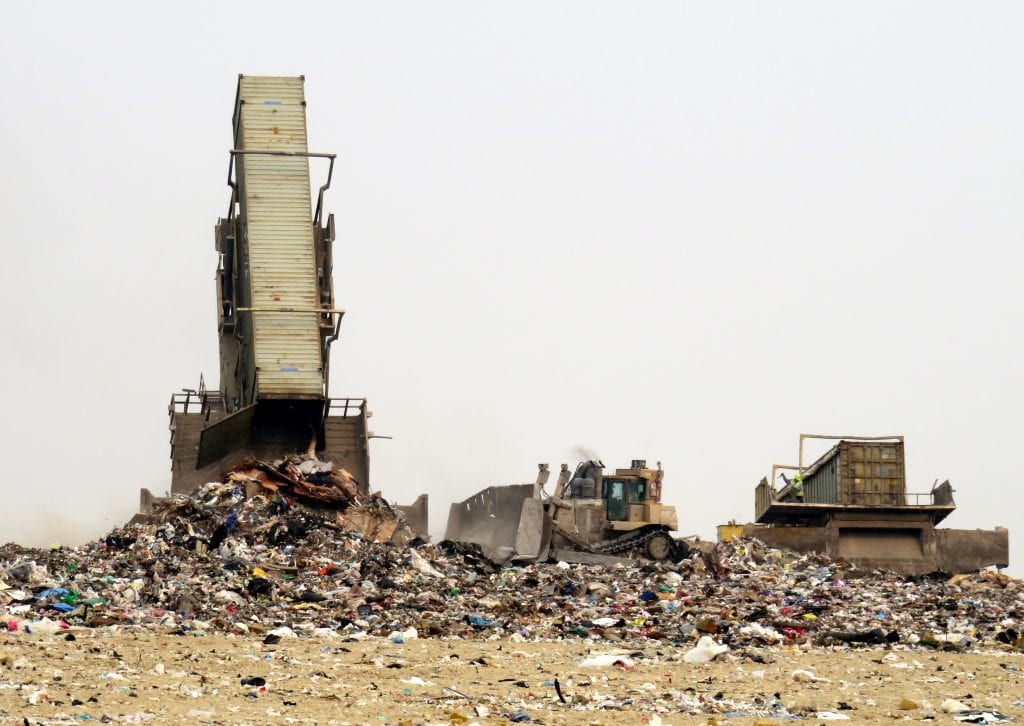 When you toss a candy wrapper in the trash, you’re sending it on a thousand-mile journey to a Lower 48 landfill. That’s the case if you live in one of five Southeast Alaska communities that send their garbage south via barge, truck and train.

We’ll take you on that trip, beginning in Sitka, as part of the CoastAlaska News series, Talking Trash.

Sitkan Megan Pasternak stands in her kitchen, holding a bag of garbage. So, what’s inside?

“Not much. There’s a couple used paper towels, I hate to admit,” she said. “And some stuff that could be composted because it’s vegetable stuff, but we don’t do that anymore because of the bears around here. And some plastics that I couldn’t recycle and a few odds and ends.”

And does she ever wonder what happens to it after it gets picked up by the trash truck?

“Not really, but I always like garbage day because it goes away from my house and just disappears,” she said, laughing.

Of course, it doesn’t. A garbage truck picks up her trash can, dumps the contents inside and hauls it to a solid-waste transfer station across town. 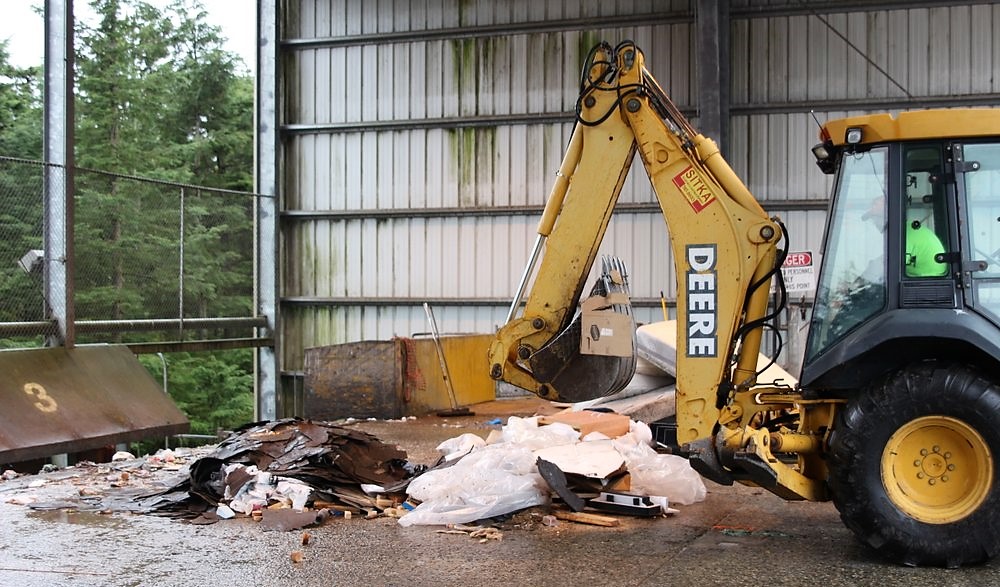 Jim Walters with Waste Connections operates a front-end loader to push trash aboard a container van, staged on the lower level of the Sitka Waste Transfer Station. The containers are barged to Seattle. (Photo by Robert Woolsey/KCAW)

There, it and most other Sitka trash is unloaded, shoved into shipping containers and trucked back across town to a barge dock. There, it joins more containers from Sitka and other Southeast towns.

Sitka’s trash has taken that trip since the year 2000, when officials realized they were running out of space.

“The landfill was reaching a level to where it needed a new location. It was becoming a mountain,” said former Sitka City Administrator Hugh Bevan.

He said officials considered building a new dump. But more stringent environmental regulations would have made it extremely expensive.

New landfills have to virtually eliminate polluted runoff. And that’s hard to do in Southeast, where it rains up to 12 feet a year.

“And the idea of shipping waste to an off-island landfill rose to the top as being the most cost-effective over the long term,” Bevan said.

Trash from Southeast Alaska and the Pacific Northwest travel by train from Seattle to the Roosevelt Regional Landfill near the Columbia River. (Photo by Tom Banse/Northwest News Network)

Sitka now barges approximately 8,000 tons of garbage a year south. When added to trash from four other Southeast cities, it totals about 22,000 tons. Another 1,300 tons of regional recycling is shipped the same way.

After arriving at the barge dock, the containers are loaded onto trucks for a short ride to the Republic Services rail yard, just south of downtown Seattle. Once loaded onto rail cars, they head about 300 miles east to the Roosevelt Regional Landfill in southcentral Washington.

That’s where the long journey of southeast Alaska’s trash comes to an end.

The landfill is in a wide bowl a few miles above the Columbia River. It’s bone dry and there’s not a neighbor in sight, which are two key reasons why it’s been so successful in getting contracts with cities near and far.

“It’s under the radar and that’s really the way we like it,” said Don Tibbetts, a Washington state-based manager for Republic Services, which owns the landfill.

“People like the garbage ferries to just take care of the garbage,” he said. “They don’t want to know where it goes. They just want to make sure it is being handled responsibly.” 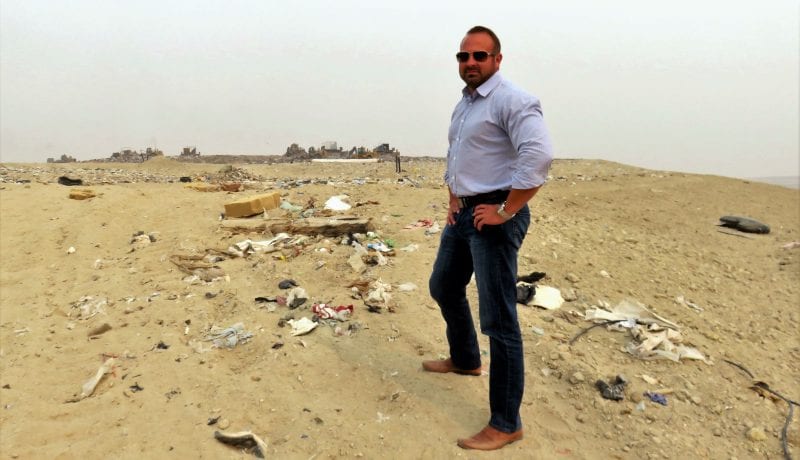 Republic Services’ Don Tibbets looks over piles of garbage at the Roosevelt Regional Landfill, where he served as general manager. The landfill takes in about 22,000 tons of Southeast Alaska garbage each year. (Photo by Tom Banse/Northwest News Network)

Tibbets said the regional landfill business took off when the U.S. Environmental Protection Agency cracked down on polluted runoff from garbage dumps. He said this landfill is “highly engineered” with liners and collection systems to capture and treat whatever harmful liquid does percolate through.

Southeast Alaska’s garbage is not alone. Much of Western Washington’s trash also heads here on trains often stretching more than a mile long.

“More than likely, about 10 percent of the containers you see on the train in front of you has Alaska waste on it,” Tibbets said.

One last truck ride shuttles the garbage containers a short distance uphill to the landfill, where the trash is finally tipped out, compacted and buried.

The decomposing garbage generates landfill gas, or methane. A network of pipes and wells collects that gas and sends it next door to a small power plant to be burned to make electricity. So in a small way, the banana peels and hamburger wrappers Alaskans throw away indirectly light homes in the small towns of southcentral Washington state.

Three other regional landfills are also located along the Columbia River.

Before Southeast communities started shipping garbage to the Lower 48, they considered a similar option — not so far away.

A group of cities called the Southeast Alaska Solid Waste Authority looked at a chunk of land in Thorne Bay, a former logging camp on Prince of Wales Island’s eastern shore.

City Administrator Wayne Benner heads up the authority’s board.

“That actually was a serious prospect,” he said. “When they first started out they were looking at a regional landfill facility. But when the study was done to look at it, it did not pencil out.”

So Petersburg, Wrangell and Klawock joined Sitka and Ketchikan by hiring Republic Services to haul its garbage south. Benner said Thorne Bay will be next.

It’s always possible that new technology and attitudes will change how the region’s garbage is handled. But ‘til then, Sitka’s Hugh Bevan thinks barging it south is the best solution.

“The thing to keep in mind with solid waste is that you’re responsible for it forever,” he said. “So if you build a landfill in your town, the responsibility for it flows to the next generation, along with all the capital costs associated with it.”

Not every Southeast community ships out its trash. Juneau, with about half of the region’s population, still uses a local landfill. So does Haines.

In both cases, garbage collection and disposal is done by a private company. 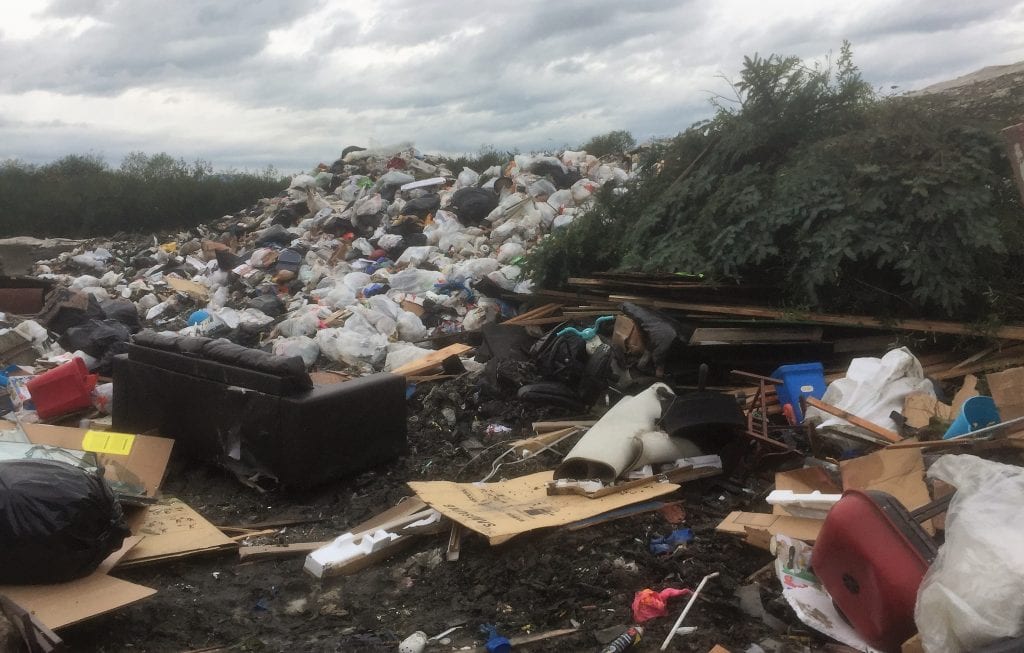 Most of Juneau’s garbage ends up in the local landfill, operated by Waste Management. A municipal study estimates it will fill up in about 20 years. (Photo by Ed Schoenfeld/CoastAlaskaNews)