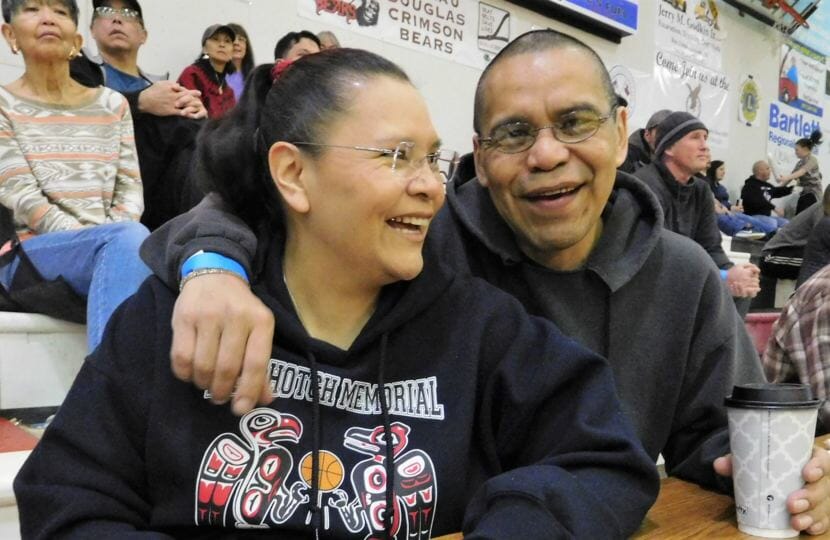 Siblings Marie and Thomas Beierly enjoy a moment during the Gold Medal Basketball Tournament, held March 18-24 in Juneau. Both are announcers during the games. (Photo by Ed Schoenfeld/CoastAlaska News)

Southeast Alaska’s Gold Medal Basketball Tournament began more than 70 years ago. That means many players and volunteers are following in their parents’ footsteps.

Gold Medal has always been a family event for Walter Soboleff Jr.

He remembers his parents helping those coming into town from smaller Southeast communities in the mid-1950s.

“Our house would fill up with ballplayers in sleeping bags. We’d go down to the boat harbors and pick up ball teams,” he said. “They’d come in the seine boats. There were no ferries back in those days.”

Soboleff was just a kid then, so it wasn’t all about the competition.

He ran around with friends and played under the bleachers – until the stars came out.

“Anytime Herbie Didrickson or Moses Johnson played, I had to be there. They were to basketball what the Beatles were to rock ‘n’ roll,” he said.

He’s not a player, but he works the event. This year, he’s at the merchandise table.

She said the stands were smaller then, but plenty of people packed in.

“Oh my goodness! It used to be held in the Juneau High School gymnasium. They had a lower level, then they had a balcony. So they had hundreds of people,” she said.

Now, there can be more than 1,000 people for the final games. They all fit in the larger Juneau-Douglas High School gym, with lots of bleachers but no balconies. 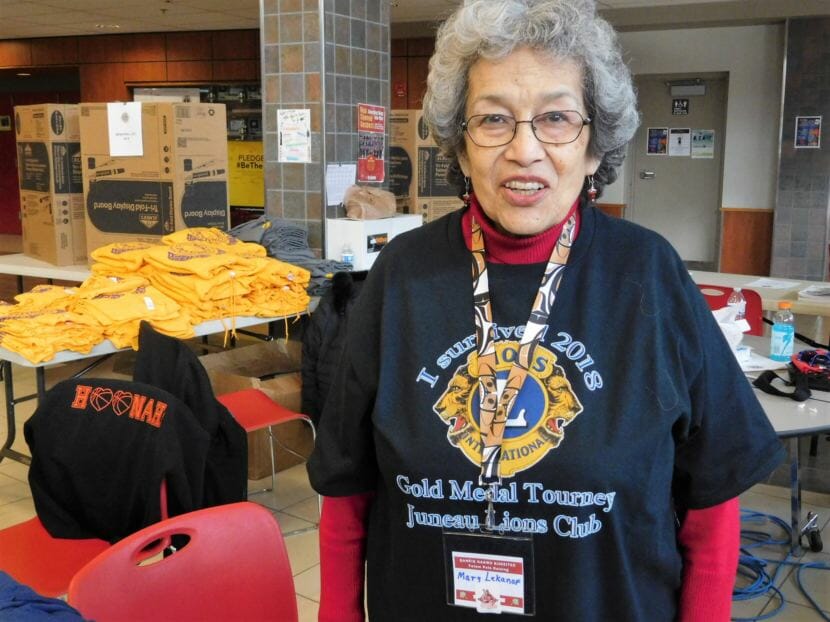 Mary Lekanof is a Juneau Lions Club member who volunteers before and during the Gold Medal games. Here she works at the merchandise table. (Photo by Ed Schoenfeld/CoastAlaska News)

Lekanof, working the merchandise and ticket tables, has seen other changes over the years. That’s because some descendants of those early players and fans moved south.

“Today you see people that are from Washington State. So they save all year so they can come up here for the Gold Medal,” he said.

Marie Beierly started working Gold Medal in the mid-1980s. Like Soboleff, she followed in her father’s footsteps.

“I was just sweeping floors and my dad was sitting here at the announcers table and he asked me to help him. He said, ‘Just give me a name and how many fouls they have.’ So I did that for him for a couple years until he just started passing over the mic and told me to announce this guy’s name. So I did,” she said.

Her brother, Thomas Beierly, also announces games in the stands and on the radio. The former player said he’s enjoyed some loosening of the rules.

“Back when I was growing up here at Gold Medal, it was fabulous. But people were so strict of players coming in to Gold Medal. But now we have the door open for other people to come in that want to enjoy and play,” he said.

The tournament runs four brackets, with teams representing about a dozen Southeast Alaska communities. That brings many hundreds of people into Juneau, giving it an economic boost.

“People have money now to spend and they didn’t. I don’t remember anyone having any money back in the old days. Now, I go to Costco and Fred Meyer and I see everybody. All of Southeast is here,” he said.

Gold Medal includes 40 games during the week of March 18-24. It raises funds for the Juneau Lions Club, which supports scholarships, eyesight assistance and donations to other organizations in Southeast.

Gold Medal sweatshirts are among tournament gear sold to offset costs and support scholarships and other programs in Southeast Alaska. (Photo by Ed Schoenfeld/CoastAlaska News)