‘Day of loss’ as Bill Brady center closes its doors 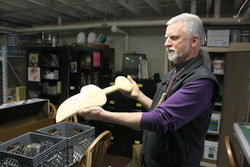 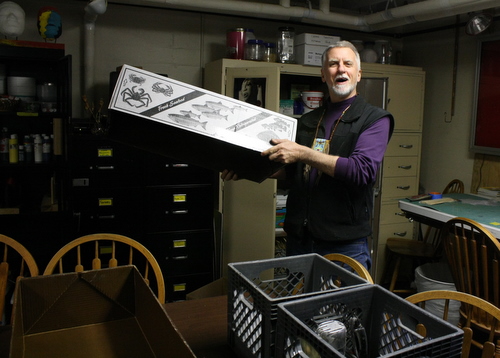 Charlie Bean uses fish boxes to pack up his workspace at the Bill Brady Healing Center. He jokes that people in other states probably don’t use fish boxes like this. (KCAW photo by Ed Ronco)

Tuesday was the last day of operation for the Bill Brady Healing Center. The inpatient drug-and-alcohol rehab program has existed in its current form since 1996. Its closure is blamed on federal budget cutbacks. The center is part of the Southeast Alaska Regional Health Consortium, or SEARHC, which relies heavily on federal money.

Bill Brady’s last class graduated in mid-April, leaving a couple weeks for employees to tie up loose ends. KCAW visited employees as they packed up their desks and looked back at their time working for the center.

In the lobby of SEARHC’s Community Health Building, Doug Osborne leads me over to a red and black blanket hanging on the wall, behind glass.

“This blanket right here, at the end of the courses, they graduate people — maybe 10, 12 people — and at the end of this 40-day program, they do a really great job of honoring people,” Osborne said. “They do a cradling ceremony and sometimes they get wrapped in the blanket. They really know how to send people off. Today it’s about how well we can send them off.”

“These guys were superstars,” he said. “They are really good, they’re passionate, ethical, dedicated. They worked hard, and did a good job. It’s a very sad day at SEARHC to see these guys go.” 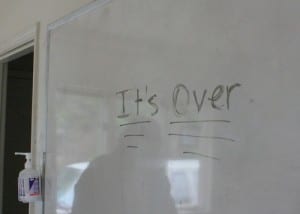 This message was written on a white board inside the house where clients lived during their stay at the residential treatment program.

Inside the center’s office building is George House. The bookshelves in his office are almost bare, as is his desk.

“I’ve been working at Bill Brady for 10 years now,” he said. “I started out as a temporary night-awake to earn a couple of bucks, and liked what I saw.”

As a night-awake, it was his job to make sure residents were safe at night — that things were turned off, and that everyone was where they were supposed to be.

“You know, you go through and make sure everything’s turned off, everything’s safe,” he said. “You count noses or toeses.”

And now he’s the evening shift leader. A job that began as simply a way to make some money turned into a calling.

“What I saw here was a lot of caring people helping others find their way,” he said. “I think what made Bill Brady click so well was mutual respect for each other among staff and among the clients that came through. It didn’t matter what your background was. They took you at face value and let you shine, you know?”

Lots of Bill Brady’s now former employees have stories like that.

Charlie Bean is in the basement of the house where clients used to stay. Down here, he led them through art projects. He’s wrapping stuff in plastic and joking about the uniquely Alaskan experience of using fish boxes to pack up your office. 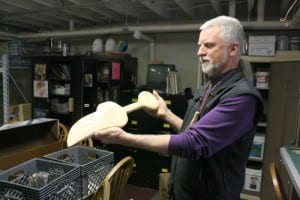 Charlie Bean holds a spoon carved in the basement where he led clients through art projects, at the Bill Brady Healing Center. Tuesday was the center’s last day of operation.

“We’ve given away a lot of stuff,” he said. “Drums, and miscellaneous odds and ends. A lot of it’s going to go to Raven’s Way next door.”

Bean started working at SEARHC in 2001, and at Bill Brady in 2005. He’s definitely had his disagreements with the institution — he laments rules and regulations that he says distract from the day-to-day, hands-on work with clients, and he mentions spending increasing amounts of time doing paperwork. But he also says this is one of the best jobs he’s ever had. This team, he says, is close.

“I’ve never experienced anything like this,” Bean said. “I’ve had close friendships and stuff, but not a group of people like this. You come in and you jump on shift, and somebody’s going out the door, and they’ve got your back, and they know you’ve got their back, and there’s this seamless kind of flow that goes on between the people. That’s been special.”

Bean says he has possibilities for work in Anchorage and New Mexico.

“I’m always going to interact with clients. It’s just part of my life now.,” he said. “It doesn’t matter where I am. My life has turned into service. Wherever I go, I’ll be doing service of some kind.”

Of the three employees KCAW spoke to, Roberta Kitka has the longest tenure. She started here as an intern in 1998.

“I wanted to help people, because I’m in recovery myself,” she said. “I stuck my toe in the door doing my internship.”

Eventually, she put in for a full-time job (“Showed up for an interview and said ‘I’m here to put my Tlingit two cents in,'” she says) and most recently, she’s been in a supervisory role. Kitka says she likes watching the transformation in clients between their first day and the time they graduate.

“We more or less serve the people who are throw-away people,” she said. “People who end up making something of themselves. We had a woman call us up, ‘I’ve got my kids back,’ or ‘I’ve only got 30 credits left and I’ll finish my college degree.’ Things like that. They’re not throw-away people. That’s the way we look at it.”

Now that she’s done working at Bill Brady, she’s moving to Anchorage. Her daughter is up there, and so is Dena a Coy, a treatment center for women and children, where Kitka did her first internship.

“And the two ladies I did it with, worked with, are still there,” she said. “So I’m going to pop my head in and say hi, I’m back.” 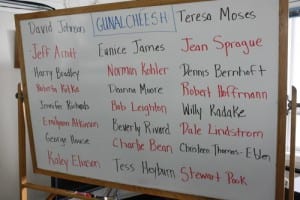 The employees of the Bill Brady Healing Center were recognized at a private lunch Tuesday. This was in the front of the room.

Back in the Community Health building, tables and chairs have been set up for the farewell luncheon. Comment cards for people to leave memories are laid out at each place. And Doug Osborne is standing behind a lectern, going over his remarks. Next to him, a dry-erase board with the names of every employee.

“So we’re making this nice, but there’s no way around it,” Osborne said. “This is really a sad day. This is a day of loss.”

From left, the Bill Brady Healing Center employees we talked to for this story: George House, Charlie Bean and Roberta Kitka.