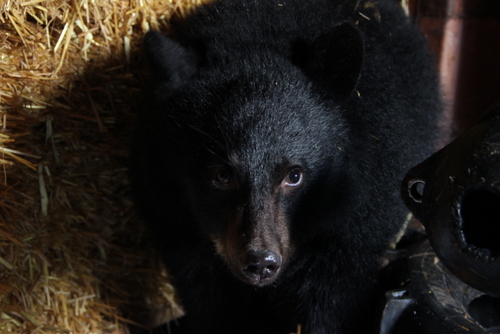 Tuliaan the bear has regained its appetite at the Fortress of the Bear. (KCAW photo/Emily Forman)

On Tuesday (12-17-13), an orphaned black bear cub was reunited with, what the Department of Fish and Game believes to be, its sister. In October, Little Smokey the bear was brought to Sitka’s Fortress of the Bear, after being found in an outhouse used for smoking breaks by the staff at the Spring Creek Correctional Center in Seward. Smokey was one of three orphaned cubs, when their mother was shot and disappeared into the forest. The Fortress’s newest cub, Tuliaan was found several weeks ago in the same smoking outhouse in Seward.

Here is what Claire Turner – a bear caretaker at the Fortress – had to say about how the siblings are getting along.