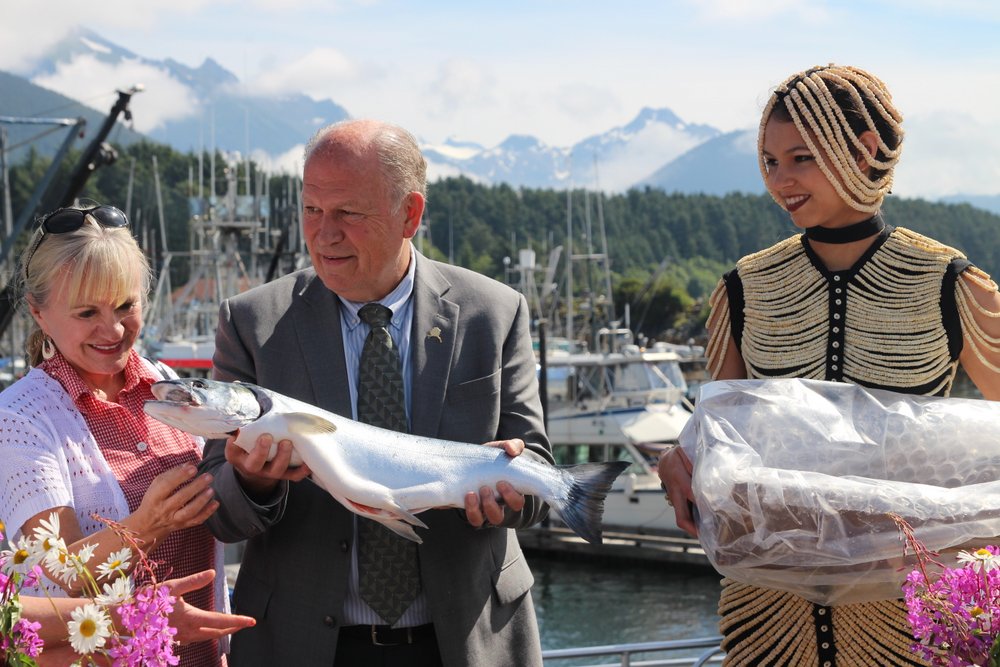 Governor Bill Walker put pen to paper Thursday afternoon (08-09-17), signing a bill at a shipyard in Sitka. The measure means big savings for small ships — especially those that ferry passengers around Southeast. On Alaska Wild Salmon Day, he also received a gift from local fishermen.

Standing among welders and boat builders, Senator Bert Stedman found the perfect backdrop for the Governor to sign his latest bill: the shipyard of Allen Marine.

“It’s very nice to have the Governor come down and meet the hands that are building these boats and maintaining them,” Stedman said.

Part of the business of maintaining a boat is flushing its wastewater in a clean way. The state has imposed news rules for how to do that, requiring installation of an advanced wastewater treatment system.

But such an upgrade would have crippled a company like Allen Marine, which has been operating day cruises since 1970. Senior Vice President Jamie Cagle said, “[Allen Marine] would have had to look at shutting some of our vessels down because there’s physically not enough space to put on the equipment that would have been required, if the exemption hadn’t been signed.” 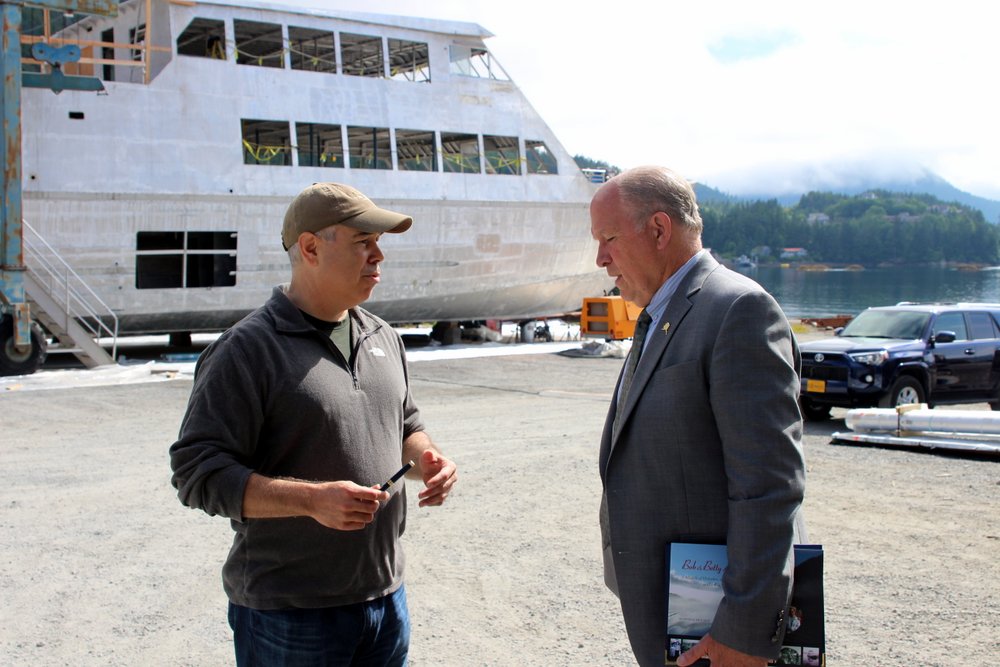 All five state ferries and 10 day-cruise boats discharge their wastewater at a shore-based facility, untreated. Senate Bill 3 maintains the status quo. Technically, it renews a state exemption for  wastewater rules while keeping boat operators  accountable to the state’s “best management practices” for protecting the environment.

All this spells good news for the Alaska Marine Highway System too, which is a lifeline for getting around Southeast. Stedman was so on top of this issue that he filed the bill before session. “Without this bill, the ferries would have millions of dollars of infrastructure improvements,” he said.

The state’s Department of Transportation estimated it would have cost $5 million to upgrade the state ferries, which would have been a gutshot for a system hobbled by significant budget cuts already.

In an original draft of the bill, Stedman also wanted to excuse some ferries from participating in a state program to put 1% of their revenue towards original art. That’s no longer in the bill. Stedman said that’s because the Department of Transportation negotiated the, but he doesn’t want the ferries to be entirely without artistic decor.

Instead, he’d rather the new ferries incorporate are from the old ones or borrow from museums. The state is building two ferries, which two young Alaskans suggested be named Tazlina and Hubbard. They’re under construction at the Vigor Alaska shipyard in Ketchikan and due to be completed in 2018.

Stedman stood watching as the Governor signed Senate Bill 3 into law. Looking on was Alaska’s First Lady Donna Walker, the state’s transportation commissioner Marc Luiken, Representative Jonathan Kreiss-Tomkins, and members of the Allen Family. Everyone got a pen. 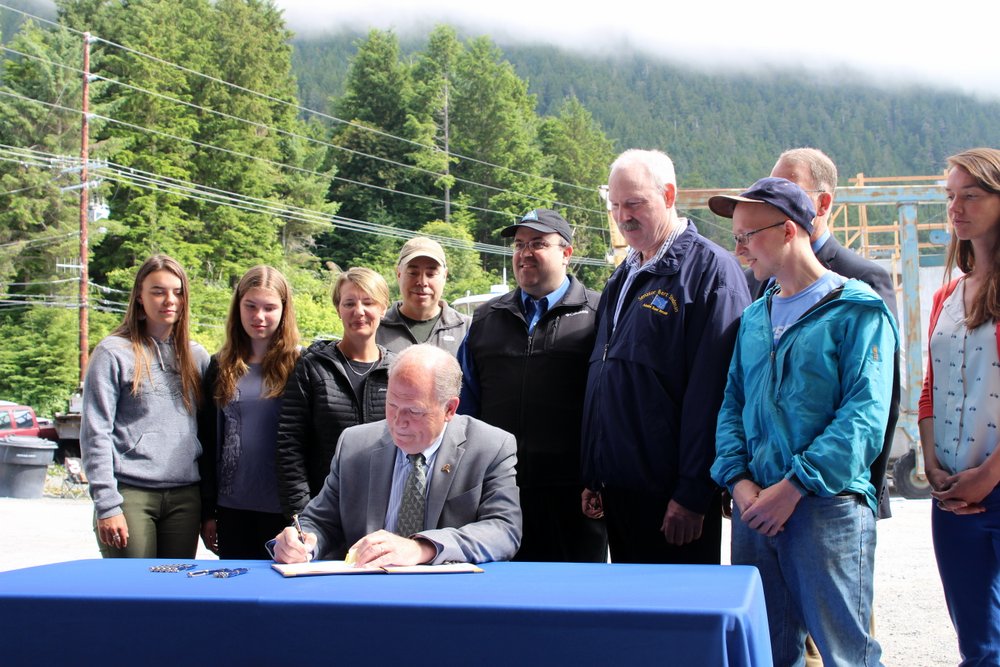 The ceremony over, boat work resumed. Walker was then whisked away to Crescent Harbor where he was presented with a gleaming salmon by a large crowd of fisherman. Thursday, August 10th was the 2nd Annual Alaska Wild Salmon Day. The sun was out. The mountains postcard ready. One of the presenters wore a dress layered with 22,000 salmon bones. 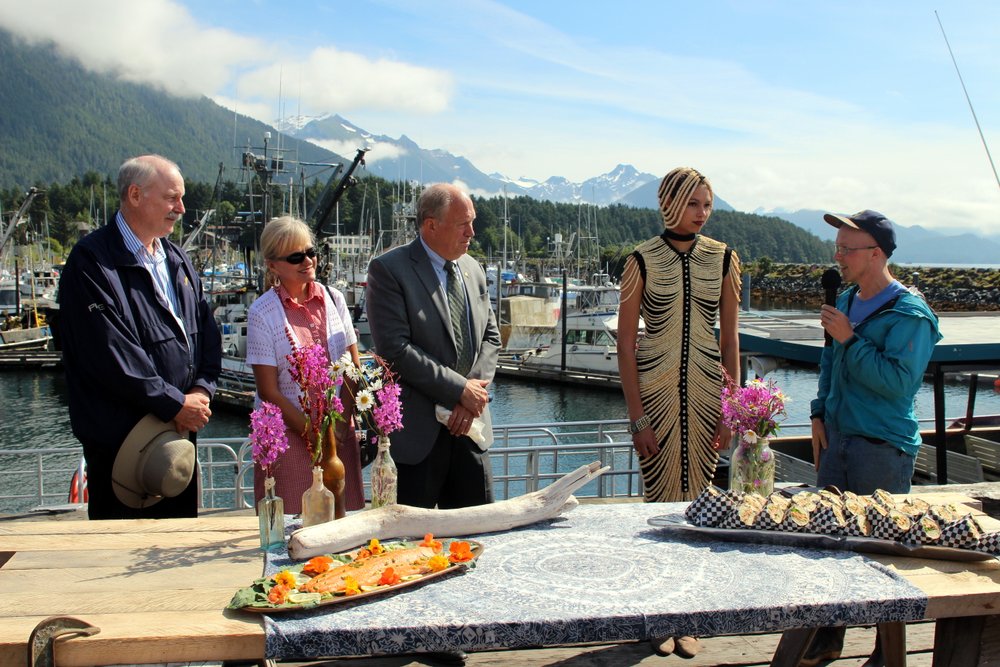 Beneath blue skies at Crescent Harbor, Ludvig’s Bistro prepared a salmon-feast for Governor Bill Walker — who was in town to sign a bill. (Emily Kwong/KCAW photo)

Holding the coho, Walker seemed truly overwhelmed by Sitka’s reception. “Since I’ve become Governor, I have not been able to get out and recreate nearly as much as I used to. I’ve been out fishing twice in the last week and this is the first one I’ve actually caught,” he said, eliciting laughter. “So, I love fishing. Catching is optional. But fishing is mandatory. There’s no question about that.”

Alaska’s legislature has been fishing too for solutions to budget problems all year. And with compromise hard to come by, you could say this wastewater bill is a major catch for Southeast.