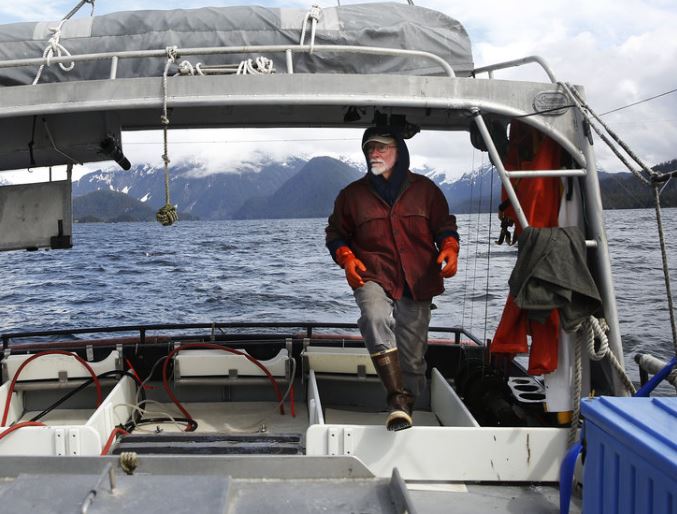 Provided it’s not reversed by the supervisory judge, the June 6 ruling by US Magistrate Judge Michelle Peterson means that trollers like Sitkan Charlie Wilber can fish for king salmon when the season opens on July 1. Wilber has fished these waters for over 40 years, and endured significant cuts to the harvest under the regulatory framework established by the Magnuson-Stevens Act. (NPR photo/Elissa Nadworny)

Commercial fishing for king salmon in Southeast Alaska will likely open on schedule this summer. That’s after a federal judge denied a request for an injunction to keep the season closed.

During oral arguments before her in May (5-28-20), Judge Peterson put hard questions to counsel for the Wild Fish Conservancy about whether the federal court had jurisdiction over the case, when the matter had not been tested before the Alaska Board of Fisheries, or the National Marine Fisheries Service — organizations which have regulated fisheries for the last four decades under the overall umbrella of the Magnuson-Stevens Act.

“The assumption is that we were supposed to know back in 2012 what the state of threatened and endangered species would be in 2019,” Beardslee said. “And if we didn’t know it back in 2012 and comment to the Magnuson-Stevens Act back then, we don’t have the right to speak to it today, and I think that’s absurd on its face.”

Beardslee and the Wild Fish Conservancy, based in Duvall, Washington, are advocating for Southern Resident Killer Whales, a subpopulation of orcas listed as endangered in 2005. A primary component of the diet of the 74 remaining members is chinook salmon returning from the Gulf of Alaska to their natal rivers in the Pacific Northwest.

The Conservancy filed a lawsuit against the National Marine Fisheries Service in March (3-18-20), to force the agency to reevaluate its management of commercial salmon fishing within the scope of the Endangered Species Act.

It filed a motion for injunction in April (4-16-20) to stop all chinook fishing offshore of Alaska until the lawsuit is settled. If granted, it would have prevented the summer commercial king season from opening on July 1.

But Judge Peterson believes the Conservancy is sidestepping the rules that everyone else involved in the fisheries has to play by. She wrote:

The authority for the commercial troll salmon fishery is exclusively provided for by the Magnuson-Stevens Act….

The judge continues: Although Plaintiff has not expressly alleged a violation of the Magnuson-Stevens Act, and desires to pursue this action solely under its ESA (Endangered Species Act) and NEPA (National Environmental Policy Act) claims, it is clear Plaintiff’s Motion seeks to enjoin NMFS’s (National Marine Fisheries Service’s) authorization and delegation of authority to the State of Alaska for the commercial troll salmon fishery in Southeast Alaska.

Because the source of the Plaintiff’s requested relief places this action within the purview of the Magnuson-Stevens Act, and Plaintiff has missed the deadline for challenging the relevant regulations, this Court lacks jurisdiction to enjoin the commercial troll salmon fishery.

Judge Peterson’s opinion is a recommendation to the next rung up the U.S. District Court ladder: supervisory Judge Richard A. Jones. Beardslee says the Wild Fish Conservancy will file a formal opposition to the recommendation, so the legal battle is far from over.

Alaska’s commercial salmon trollers aren’t named in the lawsuit, but they have decided to intervene nonetheless. Alaska Trollers Association president Matt Donohoe petitioned the Sitka Assembly Tuesday night (6-9-20) for funding to support the ATA’s legal case. He said Judge Peterson’s opinion on the injunction was just the beginning.

“She ruled in our favor on the injunction — we just found this out a couple of hours ago — and that’s great,” said Donohoe. “But we still have the lawsuit, and we have to pay for it. ATA is the only entity in the state of Alaska that’s stepped into the breech here, and we did it out of our own pockets.”

Assembly members were sympathetic, but caught up in procedural issues of their own, as they decided how to carve up a pot of available cash from Sitka’s so-called “fish box tax,” which is imposed on fish heading out of town in boxes at the airport. The ATA asked for $5,000; assembly member Kevin Mosher was adamant that they get more.

In the end, the assembly went with $5,000 over the objections of Mosher, which will substantially beef up the trollers’ war chest — and they will need it. The Wild Fish Conservancy’s Beardslee says his organization is not standing down.

“We’re in it for the long game, absolutely,” Beardslee said. “This is one we’ve been watching for some time, and it just isn’t getting better. We were hoping that the impacts that are happening in Southeast Alaska in the troll fishery would change over time, but they haven’t.”

Trollers have one potential ally who has signalled that some help may be coming, but who has yet to take action: The Alaska Department of Fish & Game has regulatory authority over salmon fishing in the gulf, on behalf of the National Marine Fisheries Service. As of June 10, the State of Alaska had made no filings in the federal court.