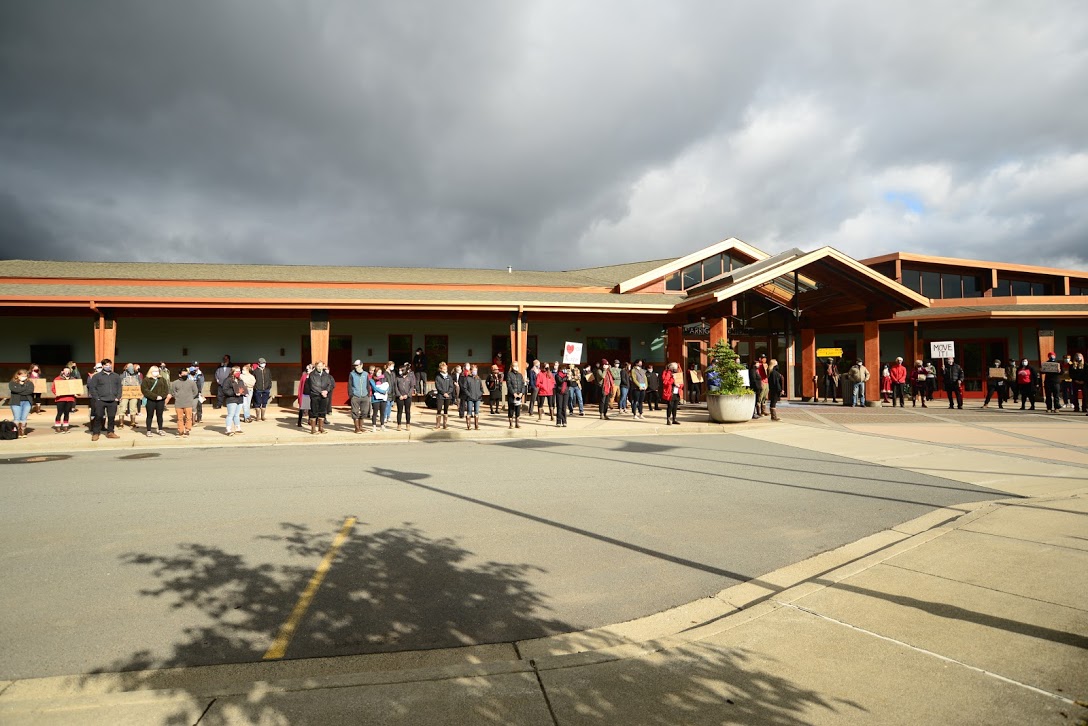 Around 120 people stood in front of Harrigan Centennial Hall to hold a silent demonstration, calling for the removal of the Alexander Baranov statue (KCAW/Berett Wilber)

For more than 30 years, a bronze statue of Russian colonial administrator Alexander Baranov has stood in front of one of Sitka’s most prominent government buildings. But not for much longer. That’s following Tuesday’s (7-14-20) action by the Sitka Assembly.

Just before the assembly met on Tuesday, a group of around 120 demonstrators gathered around the statue of Alexander Baranov in downtown Sitka to call for the statue’s removal. They stood in silence, though signs that read “Remove It Now” and “Real Leaders Acknowledge Trauma” spoke volumes.

But inside Harrigan Centennial Hall, these words were being spoken aloud. Strongly. Here’s David Sam, telling the Assembly what he thinks of the former manager of the Russian American Company.

The Baranov statue was donated to the city by the Hames family in the 1980s as a means to honor his role in boosting commerce in Sitka.

Traveling to Alaska in the late 1700s, Baranov established a trading post in Sitka in 1799 which was destroyed by Tlingit clans three years later. He returned and attacked the Kiks.ádi fort in the Battle of 1804. After resisting for days and when they lost their gunpowder supply, the Kiks.ádi were forced to relocate to the east side of the island. Baranov then established a small colony on the land, New Archangel, that would later become downtown Sitka and the administrative center of the Russian Tsar’s American colony until it was sold to the United States.

For some the statue of a top colonial commander represents oppression of Indigenous Peoples. That was the message delivered by ANS Grand President Paulette Moreno who urged the assembly to act decisively.

“And I say to you at this time, Stand! Let your spirit stand, do what is right, feel in your heart because it will be a message to the world that it is more than a statue,” Moreno said. “That it is the doorway to us exerting our sovereignty as a Native nation.”

More than 20 people spoke, mostly in favor of moving the statue. Representatives from Sitka Tribe, the Alaska Native Brotherhood and Sisterhood and the Sitka Health Coalition were among them. A petition to remove the statue received more than 2,000 signatures.

A counter-petition to keep it where it is garnered around 6,000 signatures- that petition was started by the Russian Community Council, a Russian government sponsored cultural organization that promotes the interests of Russian speaking people in the United States. But assembly member Thor Christianson said he wasn’t worried about offending those sensitivities.

“I think a large part of our population it does cause pain to,” he said. “It doesn’t hurt us anything to put it into the museum. I’ve seen all the emails. Frankly I really don’t care a bit what the Russians think. I don’t think the Russians are our friends right now, and I wouldn’t be surprised if they are gleefully looking at a way to try and stir up problems over here.”

Most assembly members were on board with moving the statue to the nearby history museum. Kevin Mosher co-sponsored a separate ordinance to put the statue’s removal up for a city-wide vote. He said he was willing to pivot, and would support the resolution to move the statue, but he wasn’t excited about Sitka joining the national movement to remove statues in the Lower 48, of everything from Confederate officers to Christopher Columbus. Mosher said he would push back if people began calling for changes to things like local landmarks and street names.

“I don’t want Sitka to become the BS that’s going on down south. I want to have nothing to do with that. I want to have a clear conversation where we treat each other with respect,” he said. “I will vote yes for this but again, I want to reinforce that I’m not going to keep voting yes on every little thing that comes, and if people call me racist, I’m going to have to say no at some point.”

But Member Valorie Nelson said she was not convinced. She said she would not vote to move it to the history museum and she suggested that other outdoor locations might be more appropriate.

“I can’t vote for this resolution as written. I could vote for a resolution that says, “Let’s move it,” but I think it needs to be done in the right way.”

Nelson was the lone dissenter, voting against the resolution to relocate the Baranov statue inside Sitka’s history museum. Now assembly members Thor Christianson along with members Steven Eisenbeisz and Kevin Knox, who sponsored the resolution, will work with Sitka Tribal Council members and the Sitka Historical Society to coordinate the relocation.

Editor’s Note: In the interest of transparency, David Sam sits on the board of CoastAlaska, a nonprofit that provides administrative, technical and editorial services to this station.